Don Hector Aguanari was born in the small hamlet of Punchana, upriver from the jungle city of Iquitos, Peru, on the Amazon River. As he grew up, he would watch his father, famed healer and Ayahusquero, Don Manuel Aguanari (Mentioned in Luis Eduardo Luna’s Book on “ Vegetalismo“) perform various healings and Ayahuasca ceremonies.

One of the ones that impressed him the most, and that he vividly recalls, is the time his father was brought a woman with a very swollen belly and in excruciating pain. Upon diagnosing her with Ayahuasca, Don Manuel saw that she had been harmed by another Ayahuascquero, using a very hard to cure type of sorcery: She had been made pregnant by an anaconda!!! (This is not a too unusual an occurrence, as Pablo Amaringo portrays such phenomena in one of his paintings included in his and Luis Eduardo Luna’s book on Ayahuasca Iconography, entitled Ayahuasca Visions. Also, I have heard accounts from various healers who claim to have been confronted by similar phenomena).

Therefore, Don Manuel set out to prepare a medicine from the very strong and highly regarded (as both, potentially healing or harmful) Katawa tree, whose resine is extremely caustic. When the woman drank the medicine, sheexperieneced very painful contortions in her belly, as the anaconda within writhed in pain. Finally, as everyone had fallen asleep, the anaconda came out of the woman, leaving only a trace of phlegm and blood on her path.

All such experiences undoubtedly had a strong influence on Don Manuel’s young son, Hector. However, Hector didn’t set out to become a shaman nor an Ayahuasquero until much later on in life, choosing rather to respond to the exigencies of making a living and raising a family in Iquitos.

It was when he was in his late thirties, that he first started to learn the medicine way of Ayahuasca, “out of necessity”, as he explains. He and his wife had fallen into a very hard rut, they literally repulsed each other, and couldn’t have the same mind on any topic. They consulted an Ayahuasquero who told them they had been done harm to (ensorcelled) by envious people who wished them apart, but even though both of them saw it was true in their Ayahuasca visions, both of them resisted believing it.

Not until his wife left him for Pucallpa did Don Hector seriously approach his Ayahuasquero healer, who then helped cleanse him and his wife of their sorcery, and helped call the soul of Don hector’s wife back to him. Two months later, Don hector’s wife, completely of her own volition, and without communication between them, was back in Iquitos, reunited with Don Hector. The healer, however, told Don hector that not until he learned the medicine way would he find peace and be free from trouble.

Therefore, Don Hector set out to learn the hard path of becoming an Ayahuasca healer. He was the last to join a group of five apprentices to his teacher. After many rigurous diets, trials and tribulations, it beceme evident that only him among the five would emerge empowered as a full blown Ayahuasca shaman. Many where the difficulties on his learning path, but one that stands out in his mind was when he was just about to graduate, and he entered a vision during an Ayahuasca session where he saw the whole world ending, and such was the horror and sadness of what he was experiencing that he wept unconsolably and promised himself that he would never take Ayahuasca again. However, he withstood the trial and emerged victorious, and ever since he has been a practicing Ayahuasca shaman with a thriving clientele, and coutless healings to his name.

He conducts his ceremonies with care and strength. His singing is powerful, and beautiful. His ritual style is quite traditional, using mostly the leaf-bundle called “Shacapa” for instrumentation, and singing in a combination of Quechua, native amazonian languages and Spanish. He combines traditional jungle iconography with Christian iconography in his songs, as is quite common among such practitioners in the Peruvian Amazon.

His healing songs came mostly from his teacher, but amazingly enough, even though long dead, his father, Don Manuel, now comes to help Don Hector in his ceremonies, and all of Don Manuel’s songs have come back to Don Hector, who now uses them.

Don Hector is in his sixties now, and going strong. He counts twenty-one students to his name, both men and women. His main apprentice is his foster-son Fernando, and together they sing well in ceremonies. “It is good to have apprentices that learn well” says Don Hector, “because when one is in trouble, one’s students may be able to help”. 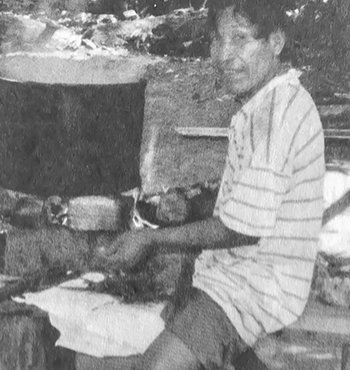